In Warfare of Annihilation: Modern Assault, the VDV appear in many of the levels, as enemy forces. When compared to the regular Russian Army troopers, the VDV are better trained. They take cover more often, have higher accuracy, quicker response times, and will dive and roll to avoid being shot. In several levels the VDV can be seen parachuting into combat. The VDV are notable because of their tan\brown camouflage uniforms, along with the fact that some of them wear sky blue berets, and many of them also wear gas masks or balaclavas. 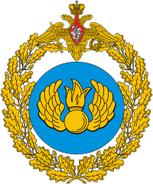 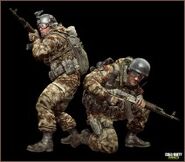 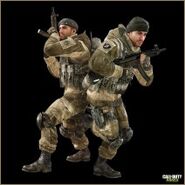 In Warfare of Annihilation: Global Conquest, the VDV appear in several support powers for the various Russian factions, deploying paratroopers, BMDs, and jeeps out of Antonov An-124s. They also appear as a subfaction within the Russian Military, with their own unique units and structures.

The VDV's emblem ingame.
Community content is available under CC-BY-SA unless otherwise noted.